Today we take a second look at the Sig ProForce M17 airsoft pistol running on CO2. I discovered last time that the Hop-Up adjustment is very sensitive. I also discovered a couple BBs that are potentially the best in this pistol when it’s running on CO2. You will recall that I also have a magazine that takes a green gas charge, so that’s going to be a separate accuracy test that I will do in the future.

The two BBs that seemed to be the best last time are the Infinity 0.25-gram and the Valken Accelerate 0.25-gram BB. Both of these are biodegradable. The Infinity seemed to edge the Valken just a little, so I started the test with it.

I shot the pistol from 10 meters. Every target you see today was shot with a 6 o’clock hold (the top of the front sight level with the top of the rear sight and the bottom center of the bull resting on the front sight). I will describe the hold and everything else I did with the pistol in each target discussion because I changed it a lot. I shot 5-shot groups for record except at the end, and I’ll show that to you when we get there.

Last time the pistol was shooting low, so at the end of that day I cranked the Hop-Up all the way up, which was less than half a complete turn. With that adjustment the BBs climbed to the top of the target paper with a 6 o’clock hold. So, for today’s first test I dialed the Hop-Up back down slightly.

I shot the first target with the pistol resting on the sandbag. The underside of the frame ahead of the triggerguard (where the Picatinny rail is) was on the bag for this. I used a 6 o’clock hold. To my surprise all but one of the BBs hit the bullseye, so my first Hop-Up adjustment was almost perfect. Five shots are in 2.17-inches between centers at the bottom of the bull. 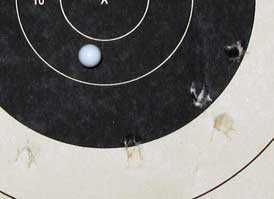 Guys — this is a very good group with an airsoft pistol. I know I have told you about half-inch groups at 10 meters, and I have seen them, but most airsoft pistols don’t do this well. I have another airsoft gun that runs on both CO2 and green gas and it doesn’t compare to this one on CO2.

Reader Rk wanted to know if the pistol would shoot better when held off the bag by two hands instead of resting on the sandbag. Since the gun seemed to already be hitting close to where I wanted it, I didn’t adjust the Hop-Up for this.

This was my second test, and things looked very good from behind the pistol. But when I went downrange and saw the target — ugh! Five BBs went into 3.761-inches at 10 meters. Nope, hand-holding doesn’t work very well. I did rest my hands on the sandbag for stability, so that might have been an influence, but since I’m doing so much better by resting the gun directly on the bag, I returned to that. I’m not trying to get the gun to shoot at its best today — I’m trying to find out which of the two BBs is the better one. It’s a subtle difference. 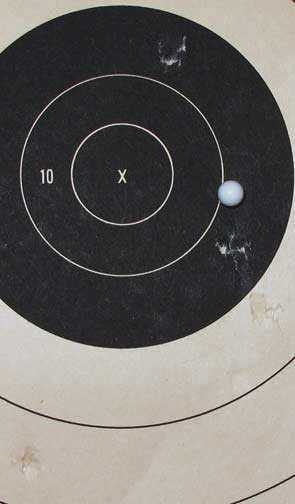 Hand-held didn’t do so well. I know this looks like 4 holes, but the hole directly below the white BB has two shots through it. And there is a third hole in the white just below and right of that.

Following this I tried several different holds and also adjusted the Hop-Up again to bring the BBs higher. I’m not showing those targets because there isn’t much to see. In the end I decided that adjusting the Hop-Up slightly up the second time like it was on the previous target was the best way to go.

I also shot several groups with the Valken Accelerate BB at this time, but there wasn’t anything worth showing. After several groups and a couple of hold adjustments, I returned to the Infinity BB as the best one for this pistol when it’s running on CO2.

While messing around I decided the best hold is to rest the bottom of the pistol grip on the sandbag. That gives good stability. The sights seem dead stable and I can hold a good sight picture that way.

The next 5 shots went into 2.179-inches at 10 meters with 4 of them in the bull. The size of this group is so close to the size of the first group that either of them could be the better one. Measuring holes made by low-velocity round balls isn’t exactly precise. It’s more of a guesstimate, with a larger margin for error than with pellets. 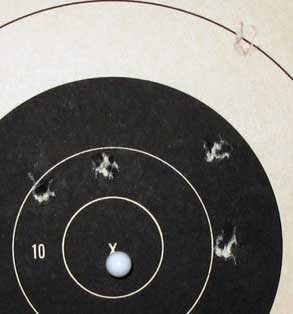 Resting the butt on the sandbag seems to be the best way to go. Five shots are in 2.179-inches at 10 meters.

At this point in the test I had shot more than 60 aimed shots and I was getting tired, but I wanted to give the last hold (butt rested) another try. So I loaded 10 Infinity BBs and fired 10 shots of timed fire. Timed fire is slower than rapid fire but much faster than deliberate bullseye-type single shots. The NRA defines it as 5 shots in 20 seconds. Each of my shots went off in 5-8 seconds. Shootski wanted me to do a Jeff Cooper, but the last time I saw Jeff before he passed away, he was riding around in an electric wheelchair at the SHOT Show. And on my best day with a handgun I was no match for Jeff Cooper on his worst day. He shot (to kill) with two hands and I usually shoot bullseyes with one. I put 10 shots into 4.634-inches at 10 meters.

Ten timed fire shots with Infinity BBs went into 4.643-inches at 10 meters. It’s not impressive, but that’s on me — not the pistol.

Now, I will put today’s test into the proper perspective. This airsoft pistol is not for shooting at paper targets. I only did it to find the best BB for the gun, which I found very easily.

Can I hand-hold the pistol and get groups like these at 10 meters? Not a chance! But that isn’t what this airsoft pistol was made for, either. This is a sidearm for skirmishers, and it can easily hit an opponent at 10 or even 20 meters when shot by a capable marksman. For distances beyond that you use longarms.

Now that I know which BB the pistol likes best with CO2 it’s time to test it with green gas. The best BB for that could be different, and the Hop-Up might also operate a little differently because as we learned in Part 2, the velocities will be 100 f.p.s. slower. However, in my limited experience, green gas should have an accuracy edge over CO2.

Beyond The Wire | Review and Gameplay

Beyond the wire is a first person shooter set during the first World War, and is a game that you

I BOUGHT A LSU RIFLE