It’s been over 2 months since I wrote about the Paper Shooters Zombie Slayer Kit, but I have been doing things with it. Today you learn the back story about my kit and what I’ve learned. Take the time to review Part 1 before reading today’s report, because a lot will be explained today. I’ll begin with plastic parts and steel screws.

In case it hasn’t dawned on you yet, steel screws go into plastic parts in just about any way they want to, and they don’t signal when they are all the way in. It’s real easy to mess up a kit like this one, if you are too ham-fisted with the screwdriver. I mentioned that in Part 1, and now I am reinforcing it. If you want to build this kit successfully, you’d better develop a safecracker’s touch!

I didn’t, and I ruined the first kit. I mentioned that in the report, but I’m emphasizing it now. That’s why you’ll want to re-read Part 1. Let’s set aside the parts that can be assembled incorrectly ( I covered them well in Part 1) and just discuss getting those steel screws tight without stripping them.

I had a thought about taking the kit on the set of American Airgunner. This would be a great way to show the viewers how an airgun works. To do that, though, I needed to build a kit that actually worked. My first gun did shoot, but it wouldn’t feed the cartridges from the magazine, and the magazine release didn’t work. So I contacted Pyramyd Air and asked for another kit. They sent me three!

I built gun number two in half the time the first one took. I now knew what to expect, and I had developed the “safecracker” touch for the screws. No mistakes were made putting this one together. As a result, everything worked right the first time and no disassembly was required. This was the gun I took to film the American Airgunner segment. But I did not finish the assembly, and I want to tell you why.

This is as far as I assembled the gun. It works and all the screws can still be seen.

It may not be obvious in the pictures, but after the base gun is constructed, all the “cool” parts that add dimension are just paper. That’s right, they are paper pieces that stick together and add dimension to the buttstock, the forearm and the receiver. The “sights” and carry handle are all paper parts. I did not want to add them to the base gun because they hide all the screws in the frame that I wanted to show in the episode. So I left my gun in the raw yellow plastic. When I arrived at the American Airgunner set, I discovered that had been a very good idea. 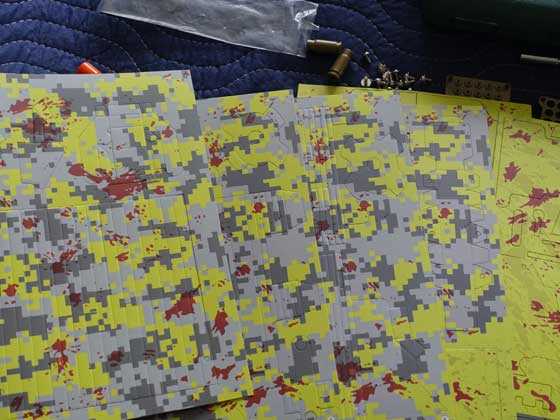 After the base gun is assembled, the rest of the parts are paper stickers. They give dimension to the basic plastic gun, but they have no structural strength.

The film company (5-Star Productions) that films American Airgunner had filmed an ad for the Zombie Slayer guns several months earlier, and they had constructed two guns for that job. Those guns were there when I arrived, so I added them to the segment we filmed. Both guns were non-functional. One never worked after it was built (sort of like my first gun) and the other one would shoot, but would not feed the cartridges. With all the paper parts stuck in place it was impossible to disassemble either of these guns for repairs, because all the screws holding the parts together were covered by the paper stickers. My gun was the only one that functioned 100 percent.

The feel of those two fully constructed guns was cheap and flimsy, in my opinion. The paper parts were soft to touch and did not hold up to much handling. My unfinished gun, by comparison, is much more rugged and functioned perfectly throughout the filming — even when handled roughly by the show host, Rossi Morreale! Once he saw how much fun the gun is, he started taking potshots on the set. That went on for several minutes. They did film all of it and I hope some of that shooting makes it to the air. Because the Zombie Slayer functioned perfectly!

What I learned from Rossi is the Zombie Slayer wants to be operated like a firearm. What I mean by that is the parts want to be cycled rapidly — not babied like I had been doing. Rossi handled it naturally and the gun fed perfectly from the magazine each time.

I will have more to say about the Zombie Slayer, but I wanted to get the velocity for you today. Since this is essentially a spitwad shooter, there is really only one ammunition to test, but thanks to some experimentation on American Airgunner, we have two ways to test it — wet and dry. I will explain as we go.

The first test will be of the paper wads/bullets that are completely dry. You get about 25 with the gun, which lasts until you can make more (see Part 1 and the wad-making mold). I figured I should shoot the wads in a dry state. Let’s do that now.

The wad or “bullet” is seated in the base of a cartridge and pushed in as deep as a finger will push. When the cartridges are all loaded, they are inserted into the magazine that then fits into the gun. Pulling back on the charging handle cocks the gun and loads a fresh cartridge. If a cartridge was already in the barrel, it will be extracted and ejected. 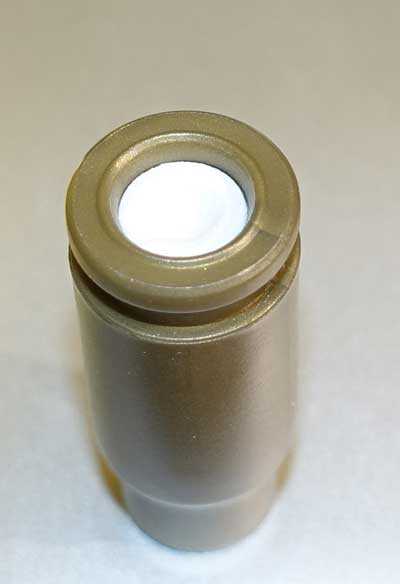 Push a paper bullet into the base of each cartridge. 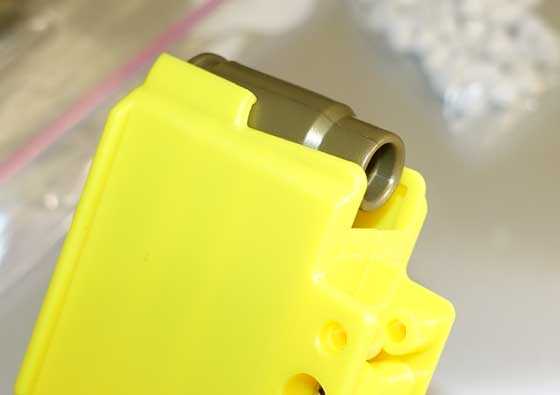 Cartridges are loaded into the magazine.

Why wet? Well, I won’t gross you out with the discussion we had on the American Airgunner set, but when we started shooting this gun, all of the crew knew a lot more about it than I did. They call me The Godfather of Airguns on the show, but I guess that doesn’t encompass spitwad guns. All I know is the entire crew knew the gun would shoot better if the “bullets” were moistened before loading.

Laying the bullets in water makes them uniformly wet in seconds.

They placed a saucer of water (yes, I said water — as in the stuff you buy in plastic bottles) on the round table and placed some of the wads in the water. They were properly moisturized within seconds, and then we loaded and shot them. Sure enough, they did seem to go faster and shot farther. I always joke about the guy whose “chronograph” is the screen-door-to-the-hickory-tree, but when the projectile is white and only goes 100 f.p.s., you really can see small differences.

Five wet “bullets averaged 100 f.p.s. The string looked like this.

Obviously wet “bullets” go faster than dry ones. But the uniformity is pretty equal. The dry string has a spread of 29 f.p.s. while the wet string only differs by 28 f.p.s. That’s not much of a difference.

I showed the deformation of the paper bullets in part 1. But now that I was wetting them, they deformed much more.

All these bullets were fired, but the three wet ones on the right deformed the most.

There is one more report to come on the Zombie Slayer. Next time I’ll talk about what you can learn from a simple airguns like this.

How to treat a new airgun | Air gun blog

Dry Drills – Training on the Cheap

REVIEW AND TEST OF THE CROSMAN STINGER P311 AIRSOFT PISTOL

This is AIRSOFT – UK airsoft gameplay at Invicta Battlefield #Shorts