Today we start looking at the Springfield Armory M1 Carbine airsoft gun. It’s not rifled so no matter what anyone says, it’s not a rifle. It’s a smoothbore airsoft gun.

The M1 Carbine is a favorite of B.B. Pelletier, so this blog may sound a little different — as in having a lot more history attached to it. In fact, let’s go there now.

Ask any red-blooded American shooter what was the standout soldier’s weapon in World War II and they will not hesitate to say it was the M1 Garand. Canadian-born firearm designer John Garand (pronounced GAR-und, with Gar rhyming with care) worked for years to perfect a design that was initially created in the late 1920s or early ’30s by firearm company, Irwin Pederson. By the late 1930s the design was accepted and in September 1937 low-rate production (10 rifles a day) began. During the war 3.5 million-ish Garands were produced, and production continued into the 1950s. It is believed that a total of approximately 5.4 million Garands were eventually produced.

In sharp contrast, the requirement for the M1 Carbine first saw the light of day in 1938. It was formalized in 1940. Two tests were run in 1941 and on October 22 of 1941 the Winchester design that is called the “13-day rifle” (because of the accelerated time in which it was developed) was accepted for production.

David Marsh “Carbine” Williams had little to do with the development of the Carbine beyond his invention of the short-stroke gas piston that made the entire concept feasible.

The Carbine production program was one of the high points of the war, from a logistical standpoint. In 38 months 10 prime contractors and hundreds of subcontractors produced over 6 million Carbines — nearly twice as many as Garands during the war and in far less time. Ironically, the only prime contractor that never had a Carbine accepted by the government was Irwin Pederson, whose production methods were decades out of date and were thus incapable of meeting the requirement for parts interchangeability. Their contract was cancelled and their plant was taken over by Saginaw Steering Gear — a division of General motors.

The M1 Carbine had performance requirements that were not equalled for decades after production ended and, indeed, are not being equalled even today. The primary one is weight. The carbine had to weigh no more than 5 lbs., yet had to handle the pressures associated with a centerfire rifle.

The Carbine was created because the Army felt its soldiers were not well-equipped with the M1911A1 pistol. Too many soldiers had problems shooting the pistol accurately, and the Army felt a small light rifle would be more effective. That sounds reasonable but two things worked against the notion. First — they named it the M1 Carbine and by the time it got to the field the Garand had already entered its days of glory. It was even made in the same .30 caliber! Too many people expected it to be a “baby Garand,” which it is not. And the second reason for its unpopularity is very similar. The Carbine looks like a rifle (which it is, of course) so people expected it to perform like one. But it didn’t. It’s cartridge is more closely related to a powerful pistol cartridge than to a rifle cartridge. The bullet is lightweight and it leaves the muzzle 700 f.p.s. slower than the Garand bullet. Instead of almost 3000 foot-pounds of muzzle energy the Carbine bullet develops less than 1,000. And the lighter bullet sheds energy rapidly, so beyond 100 yards it hits like a .30 caliber pistol.

For the purpose it was designed the Carbine is a brilliant weapon even today. But when it is compared to a powerful .30 caliber rifle cartridge used by the Garand it falls short.

However, with all the downside I’ve just mentioned, people love the Carbine when they get to handle and shoot it. It’s just right for carrying all day and for certain tactical situations. For example, a fully automatic M2 Carbine is quite handy in close-quarters engagements. As a result of the popularity, more than 30 commercial gun manufacturers have copied the Carbine since government production ceased, and it is still in commercial production today!

The M1 Carbine is the father of Ruger’s popular Mini 14 and the grandfather of the Army’s M16. I own a Carbine that has been converted to shoot the 5.7mm Johnson Spitfire that Melvin Johnson created in the 1950s. The Army used that as the starting point in the development of their 5.56mm cartridge that’s still used today.

Today we will start looking at the Springfield Armory M1 Carbine airsoft gun. It is a CO2-powered semiautomatic 6mm airsoft gun that features full blowback of the bolt. It holds 15 rounds, just like the firearm it copies. Don’t let anyone tell you that the M1 Carbine holds 30 rounds, because it doesn’t. The M2 Carbine holds 30 rounds in a curved magazine that is called a “banana mag”, but nobody who knows the rifle ever carried a banana mag fully loaded. They start having feeding issues when fully loaded. The 30-round mag does fit the M1 carbine and soldiers would stock up on as many of those mags as they could get, but they loaded them with around 25 rounds to be safe. What I’m saying is the 15 rounds in the airsoft mag are correct for the firearm it copies.

We looked at the Springfield Armory M1 Carbine BB gun last year in a three-part test. In that test we learned that the BB gun is extremely accurate — to the point of being not too far behind the Daisy Avanti 499. Can this airsoft version that looks incredibly similar be far behind? I hope not!

You have a choice of stocks when you buy the airsoft gun. I’m testing the synthetic stock that is available right now for $199. Add $100 and you can get one with a hardwood stock.

The description page on the Pyramyd Air website says the velocity is 470 f.p.s. which I think is too fast for airsoft. Reader Michael asked me to test the M17 airsoft pistol with heavier 6mm BBs because when I tested it with 0.25-gram BBs it became more accurate than with the 0.20-gram BBs Sig recommends. I ordered in a slew of heavier BBs for that test that’s still to come, so you can be sure I will try them in this gun, too.

The Hop Up (method of putting a backspin on the BB for improved accuracy) is adjustable, but it isn’t mentioned in the manual anywhere. I went online and could not find it anywhere — including in the information on the Asian models this gun is based upon.

So I asked Tyler Patner to show me and he was kind enough to send a video. The adjustment is a tiny 1.5mm (I measured it) Allen screw that’s located at the top rear of what is the chamber in the firearm. Just pull the bolt back and lock it, then there is access for the wrench. 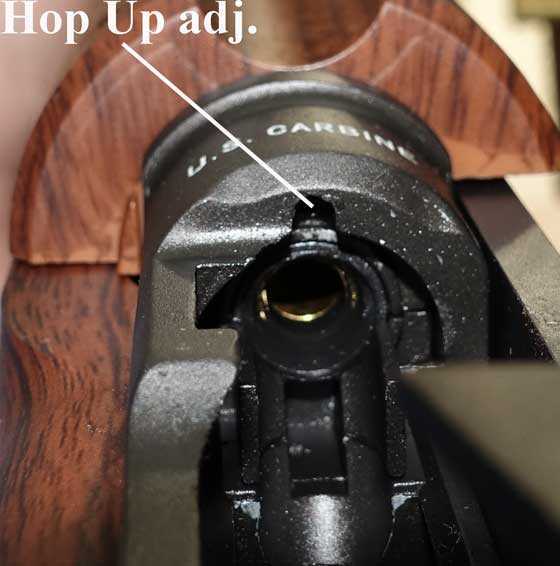 The Hop Up adjustment is a 1.5mm Allen screw deep inside the receiver, at the top of the chamber.

The Allen wrench is set to adjust the Hop Up.

The wrench for this doesn’t come with the gun, nor are there instructions in the manual. I think that is an omission that should be corrected — however, I haven’t yet seen if the adjustment really affects anything. If it doesn’t then the adjustment isn’t helpful and you should just consider the gun to be not adjustable. As long as we can find a BB that’s accurate, I don’t care about the Hop Up unless I need it.

The Carbine evolved over its life cycle. Some things, such as the stock changed right away, while others like the bolt, the bayonet lug, the rear sight and the flash hider, came toward the end of its production cycle.

This Carbine represents the final configuration of the Carbine. It has the “low water” stock that shows a lot more of the operating rod handle than the first “high water” stock. 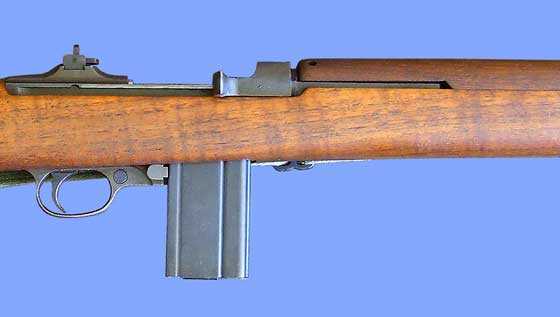 This Winchester Carbine was one of the first 15,000 Carbines made and subsequently was not interchangeable with all other Carbines because Springfield Arsenal changed the drawings after Winchester began production. Consequently these rifles never went to war and are often found in excellent condition like this one. This one has the early “high” water” stock. 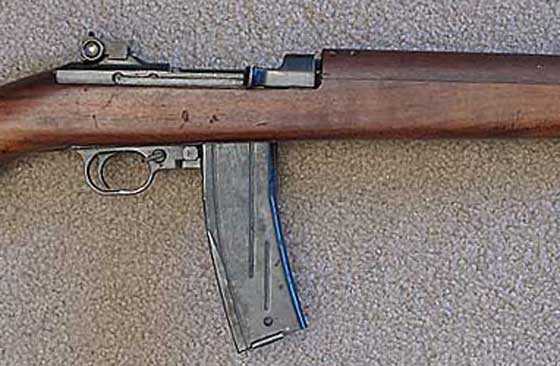 This “Carbine” was made commercially by Universal. It shows none of the operating rod — something genuine Carbines never did. There is that 30-round banana mag, by the way.

The first Carbines had a rear sight with two peepholes drilled into an L-shaped steel bar. Flip the high side up for long range and the short side up for close. Soldiers didn’t like that one and it was soon switched for a fully adjustable rear sight, of which there are three types.

This airsoft Carbine has a rear sight that looks like the all-stamped metal “type 3” rear sight that was the last version made. The firearm sight is adjustable for both windage and elevation. The airsoft sight adjusts for windage only. The peep is fixed at the highest sight setting, which on the firearm is 300 yards. I will have more to say about that when I shoot the gun for accuracy. 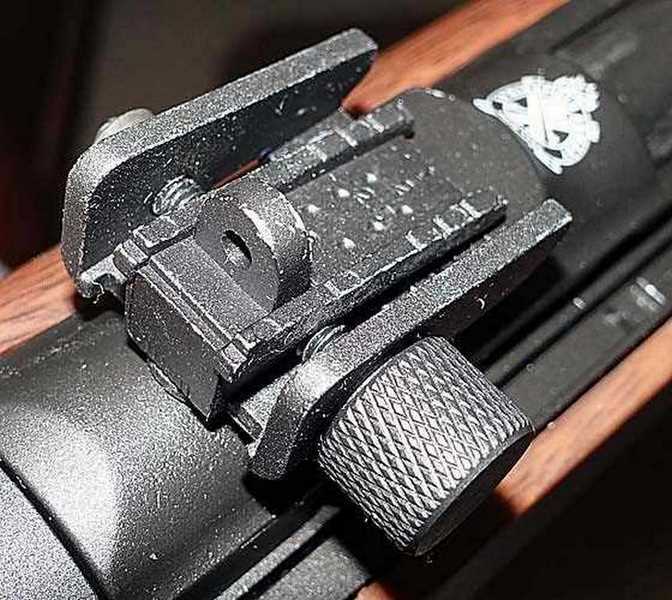 The original Carbine can be disassembled, of course. The airsoft replica isn’t designed to be disassembled. Of course it can be taken apart, but that isn’t recommended and it doesn’t come apart like the firearm anyway.

Can a bayonet be attached? Why anyone cares is beyond me, for the Carbine was never good for a bayonet. But the lug is there so can it be? How hollow is the plastic stock? I’m sure is is somewhat hollow but it doesn’t sound like it. Is the upper handguard loose? Yes — just like the upper handguards on all the firearms! Can a sling be attached? QUICK — everybody who knows how to attach a sling to an M1 Carbine take a step forward!

I didn’t think so!

I don’t know what I’m testing today. Is it a replica or is it an airsoft long gun? It’s probably a little of each, with the accent on replica.

I will say this — this airsoft gun looks just as nice as the BB gun, and I thought very highly of that one. So, get ready, folks, ’cause we’re gonna have us some fun!

Airsoft gun review check it out😱😱😱😱

Airsoft Shooting Drills with Steel Targets and WE G17